It’s not too late to start learning the social media ropes. If you’d like to get on Twitter but have no idea how to do it or how it works, you’re in the right place. This post is for you – no one here will call you a noob, give you side eye or think any less of you for just starting out now. Every single person on Twitter started with zero followers and no idea how to work the thing, I promise.

It’s good to remember that Twitter is just a communications medium – like the telephone, or email – so it isn’t inherently smart or stupid or informative or silly. Just as every email is different (one might have very important news, another might have a cute photo of a puppy, a link to a feature article about fashion or a happy birthday message), every Twitter feed and every tweet is different.

The steps below will give you the rundown on how to get started on Twitter. At first it will seem like there’s a lot to learn, but the more you use it, the easier it will get. And yes, these are just the first steps – but you have to walk before you can run, right?

1. Set up your profile

When you first go to twitter.com, it can be a little bit confusing. Nothing is there! That’s because you have to create a profile and start interacting before there’s anything to see.

Go ahead and register with a name and password. When you make up your Twitter handle (the name that follows the @ symbol) don’t spend too much time agonizing over it – just try to keep it short since Twitter limits each tweet to 140 characters.

Now add your picture. This is important – no one wants to have a conversation with an egg. Don’t use your logo, or a photo of your dog or kid (no matter how cute they are). Find a photo where you look friendly! 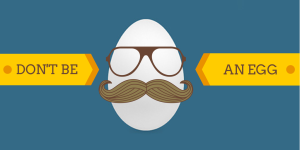 You can add a large header picture now as well, or put this off awhile. Headers are good to have for many reasons, but not essential at this point.

Next – and this is very important – you have to think about what you will be representing on Twitter. Even though in life you are a multifaceted person with interests in art and politics and dogs and business, fragmenting your persona on Twitter isn’t a good idea. You’ll be using the channel to communicate with a specific audience, and they aren’t going to be all that interested in your thoughts on other topics (unless you become a superstar – are you listening, @garyvee?) and you’ll only lose followers when you go off-subject. If you’re going to use Twitter for your business, that’s what your persona will be. Fortunately, you don’t have to make an absolute decision on this yet – but start to think about it, because eventually you’ll need to land on something.

Twitter gives you 160 characters to write your bio, which will appear under your picture when others see your profile. You can actually break the rule I just gave you (this one time) and include some of those multi-facets, because you want to let people see that you are a real person. Here’s mine: 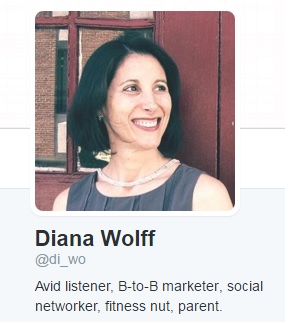 You have two more lines available below your bio. If you’re using Twitter for business, I’d recommend using one for your job title and the other to give a link to your blog, LinkedIn or other profile to show that you’re a real person. Mine are:

At the top of the page, you’ll always see this navigation bar:

Home is your news feed. Here you’ll see tweets from everyone you follow. The more people you follow, the faster the tweets will go by and the less opportunity you’ll have to see each one. There are strategies to managing this, which we’ll get into in a later post.

Moments is Twitter’s own curated selection of stories, meant to help those new to Twitter get engaged more quickly.

Notifications is where you’ll see any tweets that are directed at you, along with any retweets or favorites. When you first start using Twitter, it’s very exciting to see a little number appear here, indicating someone has mentioned you, favorited a tweet of yours or retweeted you.

Messages is where you’ll see any direct messages sent to you via Twitter. Direct messages, which can only be sent when both people are following each other, are the only private form of communication that Twitter offers.

Also on the top navigation is a search bar, which deserves its own blog post! But for now, you can look for specific people or companies by name here.

You’ll see quite a few other links and navigation on every page of Twitter as well. As the basics become more familiar, try clicking around the site, just to get to know it a little better. The more comfortable you are with the platform, the more it will all begin to make sense. A great explanation of all the tabs is on Twitter’s own help section. In fact the whole help section is terrific – but you can quickly get lost or overwhelmed by all the information if it’s all new to you, which is why I wrote this blog post.

Here are just a few bits of information you need so you can get started having your own conversations.

If you begin a tweet with someone’s Twitter handle (again, the @ symbol and nickname that follows it; mine is @di_wo), only that person plus anyone who follows you both will see that tweet in their feed. Anyone else will still see the tweet if they go to your page (which they can get to by clicking on your Twitter handle wherever it appears, or by finding you in search).

Don’t worry about making mistakes at the beginning. Everyone does, and for the most part the tweet stream goes so quickly that none of it sticks. Do, however, be cautious – don’t tweet anything that is meant to be private. Save that for email or a personal conversation.

You need to follow people in order to see any tweets in your stream. Twitter tries to get you started during the sign-up process by suggesting people to follow. Go ahead and pick some out there, even if they’re not all that interesting to you – once you’re set up you can unfollow anyone you want very easily.

We talked earlier about figuring out what your persona is – this will help to define who your audience is; in other words, who you want to follow and talk to on Twitter.

It’s important to understand that your follower count won’t grow overnight, and that it won’t grow without effort. Ultimately, though, if people like your content and you broadcast it well, you’ll start building followers.

This is a really good way to start getting integrated within the twitterverse. Twitterchats are scheduled chats where people converse about specific topics. They can be consumer-ish (#martinichat at 8 pm EST Fridays) or highly targeted (#EmailChat at 2 pm EST Wednesdays) to any business or personal interest. You can find a pretty good list of available chats here.

Look for a chat in your area of interest and hop on. It’s easiest if you go to www.tweetchat.com or www.nurph.com, log in using your Twitter credentials and enter the hashtag (pound sign, or #) and name of chat.

Introduce yourself, explain that you’re new to Twitter and/or to chatting, and then just listen and watch. People tend to be friendly in twitterchats, so don’t be nervous. You’ll learn just by seeing how other people interact. My introduction to twitterchats was the fantastic #getrealchat (every Tuesday at 9 pm EST), and it really helped me to understand the platform.

There’s still a lot to learn about Twitter beyond these basics – including retweets, favorites, lists, trends, search, hashtags, images, links, content, unfollows, tools and so much more. But every journey begins with one step, or in this case, one tweet.

Go ahead and make your first one!

About the Author: Diana Wolff

Diana is the President of LRG Marketing Communications.